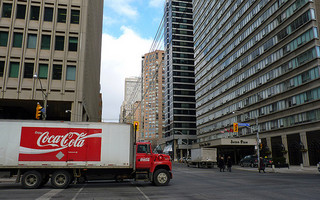 On Sept. 15, Coca-Cola resurrected a 12-year-old brand — Surge — in limited release via Amazon.com. The campaign to bring back the iconic 90s beverage was largely driven by social media.According to Bloomberg News, “Billed as the company’s first ever e-commerce reintroduction, the news was announced by the Facebook Fan site “Surge Movement,” whose 128,000 members lobbied for its return and paid for a billboard in Atlanta. Coke gave the drink a Twitter account, too, so loyalists can “follow the brand’s journey.””

The soda product, introduced in 1997, was primarily marketed to Millennials through a $50 million strategy that incorporated Super Bowl advertising and more.

BusinessWeek reports, “The company released it to compete directly with PepsiCo’s Mountain Dew, which at the time accounted for nearly 80 percent of “heavy citrus” sodas and was absolutely crushing Coke’s lagging Mello Yello.”

The product was highly controversial for its excessive sugar and notable caffeine content. Because the drink was heavily marketed to children many schools banned it, which eventually impacted sales.

Analysts believe it’s the brand loyalists like those on the “Surge Movement” Facebook page that Coke aims to capture. The obesity epidemic has all but alienated the food manufacturer from this target market — the most educated generation to date.

The Los Angeles Times notes, “The drink was exclusively available on Amazon.com in 12 packs of 16-ounce cans Monday morning [Sept. 15], and sold out in a couple of hours. Coca-Cola said in a statement [Sept. 15] that the drink might be sold through other retailers.”

Although the restricted quantities are no longer available, consumers can still choose from more than 500 Coca-Cola refreshment options currently on the market. There’s no word yet on when — if ever — the company will release additional stock.