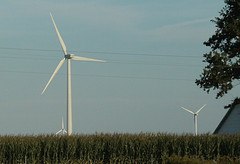 According to Avid Garman and Samuel Thernstrom in their op-ed piece for the Wall Street Journal, Europe’s use of renewable energy resources such as wind and solar power by far exceeds the use of green energy in the U.S. America’s currently generates 3.5 percent of their energy from wind and solar sources while Denmark has, so far, established their energy use from renewable resources to 30 percent and is currently working to increase that percentage to 50 percent within in the next seven years. Although hoping to increase their energy usage from renewable resources to 35 percent within the next seven years, Germany only draws 12 percent from wind and solar sources.

But is Europe’s green approach to electricity worth the cost? Germany has invested $250 billion into their renewable energy plans. Residents and business owners in Denmark and Germany pay an astounding 300 percent more for electricity than residents living in the U.S. Most Americans would agree that they are not ready to pay three times the current cost of electricity for the reimbursements green energy promises. Furthermore, these countries are experiencing reliability problems due to the inability to store overages effectively for times when less solar or wind power is available.

These problems are not yet an issue for Americans today, as the use of wind and solar energy is minimal. However, concerns about the higher cost of renewable energy sources may start to increase as states such as California pass laws requiring the use of green energy over that of power plants using non-renewable energy sources. According to Garman and Thernstrom, America will soon resemble Europe with the same cost and reliability dilemmas.