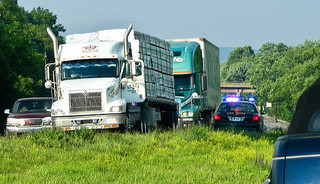 Trucking associations and carrier companies have consistently fought the new truckers’ hours of service regulations implemented last June by the U.S. Department of Transportation Federal Motor Carriers Safety Administration. These regulations cut the number of hours truckers are able to work, thereby further limiting the ability of carriers to transport all of their loads in a timely manner. Opponents of the regulations say it will eventually cause the rates customers pay to transport materials and merchandise to rise. Now these complaints are backed up by a study conducted by the University of Tennessee’s Global Supply Chain Institute. The study surveyed 417 companies. Three out of five respondents responded that they believed the new HOS regulations were going to drive up the costs of transportation. The regulations were supposed to reduce accidents caused by fatigued truckers. However, despite the new regulations, truckers are reporting more fatigue on the job, as well as lower quality of life, job satisfaction ratings, and lower pay.

According to the survey’s creator, an associate professor for the Neidert Supply Chain Fellowship Department of Marketing and Supply Chain Management for the College of Business Administration at UT Mary Holcomb, the rules are unrealistic. This is because it is going to force trucking companies to raise their rates in an economy where customer relations are paramount for business success.

Holcomb did offer some suggestions for carriers to implement to help absorb costs and keep rates down:

According to Holcomb, fewer than five percent of the survey respondents considered consolidating their shipments with those of other companies because the system is too complex to maintain over time.