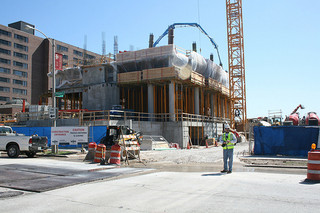 The construction industry, including the builders of residential housing, commercial construction, and the sector of civil engineering, showed the strongest increase in new purchase orders since December of 2007, according to the Markit/CIPS Purchasing Manager’s Index. The index stood at 59.4 for the month of October, following a peak of 58.9 for September. An index of 50 shows no growth, and any number over 50 is considered growth. New business expansion has been on the rise for the past six months. There was an increase in staffing among construction workers during the month of October. According to the Markit survey, 52 percent of respondents within the industry predict a rise in output over the course of the next year.

However, as the construction industry slowly gains momentum following the slump of the past six years, it’s taking suppliers some time to vamp up and meet demands for the materials. Their stock levels are low, due to a lack of demand up to this point, and the increased demand is straining the capabilities of suppliers. This leads to longer delivery times for materials, a decrease in vendor performance, as well as higher prices for the materials needed to complete construction projects of all types.

According to the survey, four times more respondents expect demand for new construction projects to increase than those expecting a decrease heading into the future. Once suppliers are able to boost their inventories and capacities, the length of time it takes to deliver the materials, as well as the prices of those materials, should drop again. This is simply the growing pains companies go through after cutting inventory and output levels in response to the lack of demand seen during the economic recession.

A senior analyst for Markit, Tim Moore, says there is a positive outlook for the future business conditions. David Noble, the CEO of CIPS, says that the optimism about the future will cause suppliers to respond quickly and meet consumer demands.