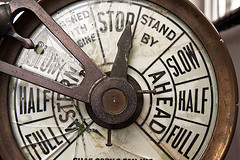 Ship owners are having to be more careful about what companies they trade with, under threat from their banks to cancel loans when the owner enters contracts with companies the bank believes to be at risk of defaulting on contracts. This means shippers are having to settle for shorter term contracts with an increasingly smaller number of clients. This information comes from the Baltic and International Maritime Council, whose members control 65 percent of the worldwide shipping fleets.

The value of merchant ships has plummeted over 80 percent in the past five years, due to the largest ever ship building and buying program, which created a vast surplus of merchant ships. Ships used to haul the most common loads, such as iron ore, agricultural produce, and coal. Since these ships are usually used as collateral for ship owners’ loans, the devaluation of these vessels means less collateral for ship builders to depend on when approaching banks about lending.

According to information from Simpson, Spence, and Young, LTD, a Capesize vessel that is five years old would have been worth $153.5 million then, but is worth only $30 million today. The ClarkSea Index, which gauges the earnings of the shipping industry around the globe, is averaging just $9,258 per day, which is the lowest level the index has held since 1990 or earlier.

Unfortunately, the over stocking by ship owners of merchant vessels coincided with the worldwide recession, which forced banks to curb all their lending endeavors. The two situations have combined for a difficult situation. However, responsible lending practices, as well as careful selection of clients and contract entries, are in the best interest of both the banks and the ship owners, according to a statement by Commerzbank.