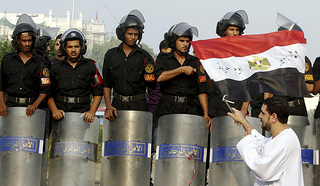 Economists are trying to understand how Egypt’s economy is remaining so stable, even as the death toll from recent violence surpassed the 1,000 mark in six days. The violence began June 30 after the ousting of Islam President Mohamed Mursi, a member of the Muslim Brotherhood. The new military government is struggling to keep industries running and keep the Suez Canal operational. Yet, since protests began, the two primary stock indices in Egypt are up a shocking 12 percent.

Additionally, Egypt’s loan rates (the rate at which investors charge the government to receive loans) is slightly down. Global investors don’t seem to be panicking quite yet. On August 19, the yield on one year government bills was just 12.9 percent, down from June’s rate of 14.9 percent. Investors seem to be trusting Egypt’s military government to keep business open, according to a statement by William Jackson, an emerging markets economist with Capital Economics, speaking to Bloomberg News.

Trading volumes have been light, which may explain the lack of movement. Businesses in Egypt are glad the military is in charge, and are working hard to keep the economy stable. Though Egypt’s tourism industry has taken a tremendous hit as most foreign governments urge their citizens to stay out of the country, many other industries have seen little impact. The oil industry in Egypt has not ceased nor slowed production, and the textiles industry also seems to be performing well.

Oriental Weavers, a Cairo based textile producer, has seen their stock values rise during this turmoil, up 4.3 percent from June, following their second quarter gains of almost double their previous values. Saudi Arabia has shown support for the military government, primarily because their leaders oppose the Muslim Brotherhood, and hence Mursi. The United Arab Emirates, Saudi Arabia, and Kuwait have pledged $12 billion in assistance to Egypt, and have delivered $5 billion, according to government media in the region.

Egypt is, however, running low on foreign exchange reserves, and is damaging their relationship with the International Monetary Fund and the United States. Curfew has also hindered local business efforts, and the closing of Shell and GM offices also hurt. It remains to be seen if Egypt’s economy can sustain stability over time if protests continue.