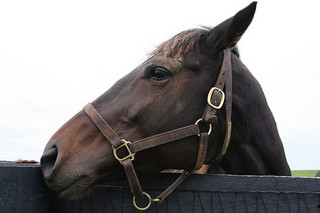 The new year didn’t ring in so merrily for Aldi and Lidl stores in Tesco Ireland, as the Food Safety Authority of Ireland discovers through DNA testing that beef burgers sold in some of these stores was, in fact, as much as 30 percent horse meat. Investigators have spent the rest of the year trying to piece together the story that explains how this meat ended up on store shelves.Though the investigation has uncovered some horrifying practices within the meat industry in Ireland and the UK, it has not yet discovered exactly how the horse meat was introduced into the beef supply chain. But the digging has unearthed a complicated supply chain wherein the right hand rarely knows what the left hand is doing.

The most recent discoveries are Laurence McAllister, a horse dealer from Country Antrim. He was busted transporting horses without the proper paperwork, many of which were sick. Authorities came across McAllister when he made his return trip from delivering horses to Red Lion abattoir, owned and operated by the Turner family. McAllister was transporting marijuana on the return trip.

The Turner family claims that all the horses they bought were transported legally. However, the Turner family has already been under scrutiny for their alleged animal rights violations. The Turners, in turn, were supplying meat to Willy Selten, a Dutch businessman who hired Polish workers to cut and mix the meat, some from horses, some beef, and some pork. The workers report working with meat so old that it made them retch. Selten denies this meat was for human consumption, however, and claims it was meant for pet food.

Meanwhile, authorities are still trying to track down exactly where in the supply chain the horse meat was introduced into human food marked as beef. With more than 40 suppliers involved in the chain, it’s proving an almost impossible task.