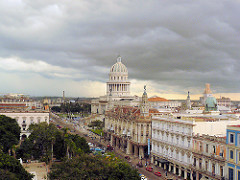 The Cuban trade embargo has been in effect since 1962, after Cuba nationalized several American-owned assets equaling over $1 billion. Though the two nations have had countless disagreements ever since, in mid-2015 Cuba agreed to allow U.S. embassies to reopen in its major cities. The relationship between the two countries has recently begun improving, which could be promising for future trade opportunities. Here’s a closer look at the possible implications of trade between Cuba and the U.S.

Current Trade Between the U.S. and Cuba

It’s a litle-known fact that the U.S. already exports millions of dollars in goods to Cuba each year via a channel for humanitarian relief. Since 2000 the U.S. has sold meat, wheat, corn, and other agricultural commodities to the small country. The trade only goes one way, though. In the U.S. it’s still illegal to buy products and commodities from Cuba in any form because of the longstanding embargo. In addition, Cuba must pay for goods with cash because the nation isn’t allowed credit.

What Would Happen if the Embargo Is Lifted?

Every year Cuba imports more than $6 billion in goods from around the world. The U.S. only accounts for 5 percent of that market because of the embargo. If the embargo is lifted, however, this creates a huge potential revenue stream for the U.S. With negotiations still in progress, there are still numerous issues to address before trade becomes a real possibility.

Former Secretary of Agriculture John Block has expressed that he sees incredible financial potential in trading with Cuba. As he stated, “If we can get trade opened up … and also make it possible for [Cuba] to work with companies to get financing when they need it, then I think we’re going to be positioned where instead of selling to Cuba $200 million worth of products, we can be over $1 billion in a year.”

President Obama stated that the two nations will continue to have some very serious differences, but the U.S. will not hesitate to speak up when Cuba’s actions contradict American values. This shows that the U.S. is trying to find ways to get along with Cuba, but there is still a lot of work to do. More than 50 years have passed since free trade between the U.S. and Cuba last took place, and the underlyiing issues can’t be resolved overnight.

The establishment of a U.S. embassy in Havana is just the first step in reestablishing trade relations. Several months or years could pass before free trade actually becomes a possibility, but Cuba has shown strong interest in the future trade. After all, the island nation is only 90 miles off the coast of the U.S., which presents clear benefits in terms of the cost of moving goods.

Ports in Cuba are already preparing for possible trade off the coast of South Florida. Many companies in the U.S. are also gearing up for these trade possibilities. The U.S. stands to gain a lot from these renewed relationships in Cuba, but it hasn’t happened yet.