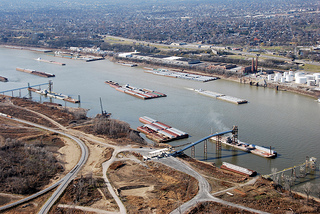 Reuters news agency reports that the Army Corps of Engineers is being forced to close numerous locks along the Mississippi River due to rising flood waters. According to spokespeople for the Corps, it is unclear when barge traffic will be allowed to resume due to chances of even more rains in these regions in the coming days and weeks.

As of early Thursday morning, June 27, lock 12 near Bellevue, Iowa was preparing to close. Locks 16 and 17 a little downriver from lock 12 were preparing to close just afterward, according to the Army Corps spokesman for the Rock Island District, Ron Founier, speaking to Reuters. Between Saturday, June 29 and Tuesday, July 2, the corps is planning to shut down locks 13, 18, and 20 through 22.

Lock 24, located near Clarksville, Missouri will probably shut down between Thursday, July 4 and Friday, July 5, according to St. Louis District Corps spokesman Michael Petersen. Neither of the spokesmen could guess when the locks will reopen due to the questionable forecast.

Barge traffic on the Mississippi River is crucial because it is where 60 percent of all U.S. grain exports make their way from production areas in the Midwest to Gulf ports where they leave the country. Prices for corn and soybeans in the Gulf had already risen 7 to 10 cents per bushel by Tuesday, with even higher prices expected soon.

Even before the locks began closing, a few grain elevators were unable to load their barges for shipment because the water raised the barges too high to get them under the loading spouts. Before things get better, most of the locks between 12 and 24 are likely to close.

This is the second time in June the area has faced lock closings due to rising floodwaters. Corps engineers are forced to remove critical lock operating equipment when the water reaches a certain level.