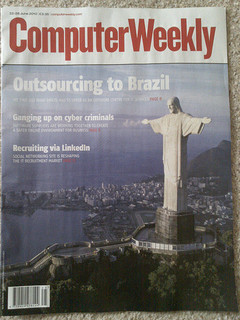 Outsourcing the production of goods is not a new thing. Companies know they can manufacture most products for cheaper overseas and still charge consumers high prices. Consumers don’t blink an eye because it is a common business practice that they’ve come to accept. Outsourcing is a business decision — cheaper labor means more profits for companies. However, the cost of labor in some third-world counties isn’t always cheaper. Let’s take a look at Brazil.

The Cost of Labor in Brazil

Brazil’s economy is emerging. It is still technically considered third world because of its shear size, but it’s not at the same level as its third-world peers. Therefore, producing goods in Brazil is relatively expensive. However, there several other factors that drive up the cost of labor in this country.

Most people expect the cost of labor to be cheaper in poor countries; however, Brazil is proving that stereotype wrong. Production in Brazil is comparable in cost to production in European countries. According to a study called Competitive Alternatives, the cost of producing goods in Brazil is only 7 percent cheaper than doing it in the U.S. In China and India, the same labor would be about 25 percent cheaper than in the U.S.

Reasons Why Outsourcing Is Expensive in Brazil

The cost of labor in Brazil is more expensive than other third-world countries because they have higher salaries, including their minimum wage. Additionally, there are tax barriers and union negotiations to sort through. However, the government is working on reforms that will make Brazil a better place for outsourcing.

A Deloitte representative said, “It is now up to the Brazilian government to do its part, by maintaining political and economic stability and gradually reducing the ‘Brazil Cost’ and the level of bureaucracy, in addition to continuing to make important investments in the educational area to prepare professional and skilled manpower.”

Why Some Businesses Still Decide to Outsource to Brazil

Even though producing goods is more expensive in Brazil than other third-world countries, it is still cheaper than doing it in the U.S. This is the main reason Brazil still has an outsourcing market. There’s also something to be said about Brazil’s location. Companies in the U.S. consider outsourcing to this country “nearshoring.” Nearshoring is generally less expensive logistics wise than shipping overseas. Some major players in nearshoring to Brazil include HP, IBM, Accenture, and Unisys.

IT outsourcing used to be very expensive in Brazil, but things are getting better. This is partially due to legislation back in 2011 that lowered tax rates and subsequently the cost of labor. Brazil’s president, Dilma Rousseff, created the Bigger Brazil Plan to make outsourcing IT to Brazil more appealing. It reforms Brazil’s competitive infrastructure. This is another important reason why some businesses still decide to outsource to Brazil.

It’s important for companies that do outsourcing to weigh the pros and cons of producing goods in one country versus another. Price should not be the only consideration. Political and economic struggles are also a major consideration. Outsourcing in Brazil may be more expensive than some third-world countries, but it still has its advantages.