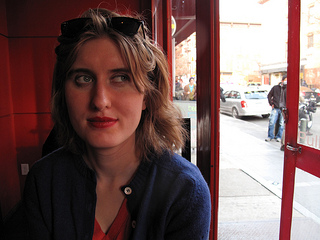 A new brand unveiled by Air Canada may have passengers wondering whether kindly hipsters have hijacked their planes. Air Canada Rogue, as the new airline is called, has introduced new uniforms for its on-flight crew. The uniforms are supposed to get passengers in the vacation spirit. Some people, however, may worry that they’ve accidentally boarded a non-stop flight to Williamsburg.

The uniforms feature red cardigans, bluish-grey trousers, and fedoras. They also come with brightly colored ties for the men and scarves for the women. The uniforms look like something students might where at a prep school for buskers.

Rogue has caught some ribbing online for the new uniforms. Quite frankly, the jokes are easy to make. But Air Canada Rogue doesn’t mind. The company’s vice president of customer experience says Rogue is happy the youthful, hip look is coming through so clearly. The airline wants to distinguish itself, and it’s confident that it has found a branding strategy that communicates its personality perfectly.

There’s also the matter of saving money. The hipster clothes reportedly cost less than Air Canada’s regular uniforms. Rogue employees are also willing to take a pay-cut to work with the company and don its dapper threads. The Toronto Star reports that Rogue employees will receive $22.99 an hour, which comes to just over $20,600 a year.

This is definitely a new approach to dressing airline attendants. Previously, airlines have focused on making sure their employees wear formal uniforms. Many of them look like they’re styled after military uniforms.

Rogue has taken a brash approach that has already gotten the airline plenty of attention. Like the hip clothes worn by attendants, though, one must wonder whether this is just a fad. Will the airline try to keep up with the trends of youthful hipsters? If not, its cool duds could look rather unhip by the end of the decade.