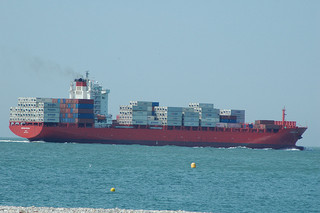 Ebola is spread from person to person. It is not transmitted through goods shipped from areas where people are infected with the disease. However, the Ebola crisis is still causing shipping delays around the world. The problem is not the goods being shipped, but the drivers and pilots transporting the goods.The Ebola outbreak in West Africa is the largest in history. Over 9,000 cases have been reported worldwide with less than a 50% survival rate. With these kind of numbers, it’s no wonder that people are taking precautions to cut down on contact with transportation professionals who come from areas where people have the virus.

The problem is that people infected with the Ebola virus do not show symptoms immediately. Ebola’s incubation period is 21 days. So, people can be contagious before they start showing major symptoms. Shipping goods around the world usually takes less than two weeks. Even cargo ships from West Africa to the United States take less than 21 days.

Cargo ships typically have a medical professional onboard with basic training, such as an EMT. When serious health problems arise, they radio for medical advice. These medical professionals should know to look for the symptoms of Ebola and quarantine any possible cases. However, it’s unclear whether this is actually happening. This has lead ports around the world to conduct health screenings on all cargo passengers before ships are allowed to dock.

In the U.S., most ships are subject to mandatory health screenings. However, there are no national protocols in place on how this should be done. Guidelines from the International Chamber of Shipping and other international organizations were released in August to help ports know how to conduct screeening. However, confusion around this is causing delays. As Ebola continues to spread, more shipping delays can be expected.