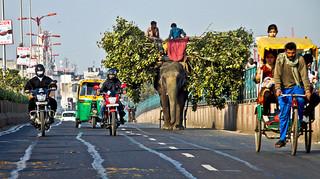 According to Reuters India, “Honda Motor Co is looking to boost its market share in India with the launch of a seven-seater, multi-purpose vehicle which has been a runaway success for the Japanese carmaker in Indonesia. Since the launch in January of the Mobilio in Indonesia, Honda’s sales and market share in the southeast Asian country have soared, hurting rivals such as Toyota Motor Co and Nissan Motor Co.”The manufacturer is looking to expand its reach. The Indian market for vans typically lies in the nation’s taxi drivers. Honda officials hope that improving India’s roadways could make way for a more versatile transportation market.

The Wall Street Journal notes, “The seven-seater [van] will be competing head to head with Suzuki Motor Corp.’s Ertiga and Toyota Motor Corp.’s Innova among others. The new Honda seems to be targeting the value-for-money conscious families. India is a relatively young market for multipurpose vehicles which are targeted at families and taxi operators. Ertiga has been the best seller in this category but it now may be getting some competition.”

In Indonesia, more than 1.23 million cars were sold – a number which lead automakers to pursue the Indian market.

Currently, the Mobilio is already on order in India – with at least 5,800 reservations in the new space. By comparison, Toyota captured only 5,377 leads on its multi-purpose vehicle, which debuted in India in June. Analysts predict that future auto sales will double. Regardless of the brand, India is an up-and-coming location for versatile transportation.

The Economic Times reports, The [multi-purpose vehicle] MPV is being manufactured at Honda Motor Car India Ltd (HCIL)’s facility in Greater Noida near New Delhi with localization level of more than 90 percent.”