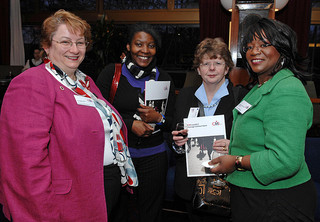 A recent poll conducted by SCM World surveyed Fortune Global 500 companies and determined that just 10 percent of the leadership positions within the supply chain are held by women. Part of the reason for this disparity is due to the roots of the supply chain, which lie in manufacturing and transportation, traditionally industries that did not employ large numbers of women. The poll concluded that both men and women within the supply chain feel that women have different skill sets to offer the industry, but that the skills women do offer would be beneficial to the success of supply chains. In all industries worldwide, women hold a comparative 24 percent of high level leadership positions. The most typical such positions held by females include chief financial officer, human resources director, and corporate controller. Ninety six percent of the women polled and 74 percent of the men polled felt that women had unique skills to offer the industry, including emotional intelligence, self-awareness, empathy, humility, and the ability to be steadfast.

Fifty two percent of women polled believed there were barriers in the industry preventing women from rising to the topmost levels, while the same percentage of men did not believe this was so. Seventy-five percent of women and 63 percent of men responding to the poll stated that men and women have different sets of skills to offer the industry.

The number of women holding high-level positions within the supply chain is not likely to change much anytime soon, however, as just 37 percent of the students enrolled in supply chain management courses at colleges and universities are female. However, three-quarters of those learning institutions reported that female enrollment in those courses is on the rise over the past five years. Seventy one percent of these institutions expected female enrollment in supply chain courses to continue to rise over the next five years.