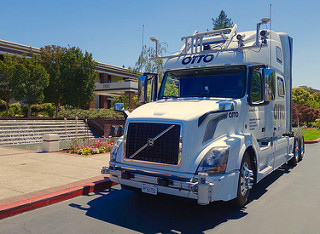 Otto shipped a truckload of Budweiser from Fort Collins, Colorado, to Colorado Springs, Colorado, while the driver monitored the route from the sleeper berth of the truck. The delivery was almost completely autonomous, since the driver only took the wheel as the truck entered and exited the highway ramp. During this two-hour journey in the morning hours, the truck averaged 55 miles per hour. Otto received $470 for the shipment because the truck was outfitted with its driverless truck technology.

As Reuters explains, “Transportation experts predict the earliest applications of autonomous technology will be in self-driving trucks, not cars. The technology is best suited to the relative predictability of long hauls on highways, rather than busy city streets with many distractions.” Long-haul freight has a lot to gain from driverless trucks, and the industry is pushing for more research and testing.

Otto is already working with several commercial partners to install driverless systems on trucks. The technology works to increase safety by precision mapping, GPS tracking, camera monitoring, and more. Eventually, it’s Otto’s goal to eliminate the driver entirely and operate all of its trucks remotely. The company will still need drivers to monitor the driverless system for the foreseeable future, though.

Several Otto competitors are also developing driverless truck technology. Business Insider reports that Daimler plans to release a model by 2020. The company made history in 2015 as the first to use a semi truck to test autonomous features on a highway. It’s a race among Otto, Daimler, Cargo Chief, Convoy, Transfix, and others to gain market share of the driverless truck industry.

Changes in the Transportation Industry

While it’s likely that the first fully autonomous vehicles will be trucks, most new cars already come with autonomous features. For instance, parallel park assist and lane detection sensors have made their way to almost every car manufacturer. Industry leaders, such as Tesla, have an autopilot mode that can merge on and off of freeways without driver assistance.

Autonomous features are making roads safer, and it’s possible that driverless cars will be available to consumers in the future. However, the trucking industry has the most to gain from self-driving vehicles. Freight trucks can easily cost upwards of $150,000. Shipping becomes even more expensive with the addition of a driver’s salary. Eliminating the driver would help keep shipping costs low for businesses and consumers. This is essential, as consumers are now demanding affordable one- and two-day delivery services.