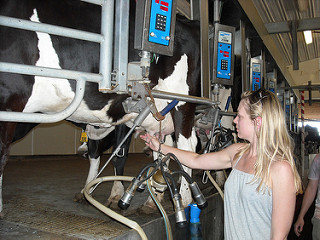 Farmers have been implementing new technology for decades. Today, some dairy farms can practically run themselves thanks to technological advances. Thanks to robotic milking machines, cows can roam freely and then go to a milking station when they need to be milked. This automated process saves farmers a lot of time and allows them to focus on improving other aspects of their business, such as supply chain efficiency.

Not a Premium Member yet? Join today.

Robotic milking systems require all cows to have an ID tag that tracks the number of times they enter a milking station and how long they stay. If a cow enters one of these stations before it needs milking, the exit gate opens and the station encourages the cow to leave.

The robots brush and clean each cow’s udders before attaching the milking pumps. A laser pointer precisely pinpoints where to place the clamps to make milking more comfortable for the cows. When done manually, this can take an extraordinary amount of time.

Bloomberg Technology highlighted Sunny Glade Farm, which has been in operation for four generations and has about 250 cows that require daily milking. The farm uses an automated machine to feed its cows, and the farm’s milking system collects 128 pieces of data about each cow. The system uses the information to adjust nutrients in the feed in order to increase milk production.

The Benefits of Robotic Milking

Traditional dairy farms milk cows twice a day by manually hooking them up to an automatic pump, which can be a time-consuming process. In contrast, robotic systems sometimes milk cows four to five times a day. This reduces pressure on the cows’ udders and promotes higher milk production. It’s also healthier for the cows because this process mimics how often a calf would nurse. There are rarely long queues for milking stations, and cows even learn to get in the shortest lines.

As the BBC explains, 5 percent of farms in the United Kingdom are already using robotic milking. That’s slightly higher than the percentage of American farms that have adopted this technology.

In general, the high investment cost is the reason that more dairy farmers haven’t already implemented robotic milking. These machines can cost upwards of $100,000, which doesn’t include the annual cost of operating the machines. It’s hard for farmers to justify the investment since the price of milk hasn’t gone up in recent years.

Farmers that do make the switch to robotic milking systems are seeing the benefits. With automated systems in place, dairy farmers no longer have to spend most of their time hooking up cows to milk pumps. Instead, dairy farmers have more time to focus on other business operations, such as looking for ways to lower supply chain costs and negotiating better supplier and distribution deals.